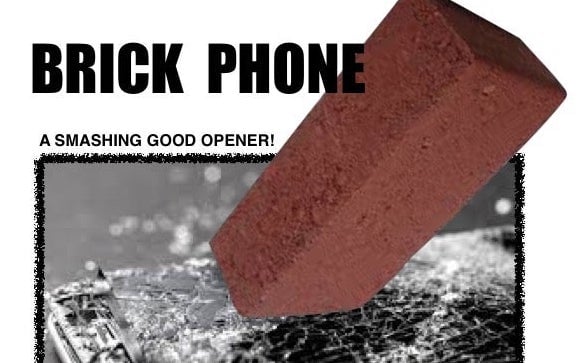 This is the smash hit from Scott's recent lecture tour! The perfect opener that provides interest, comedy, drama and audience involvement that keeps them on the edge of their seats. You give a person a choice of two bags after asking them to borrow their mobile phone. They then decide between two bags. Each bag has an object you could potentially drop onto their face up phone. When it is revealed they have chosen a BRICK the stakes jump through the roof. Then they see you let the brick fall through the air directly towards their phone. A sigh of relieve is heard followed by laughter as the brick bounces harmlessly off their phone. It is a rubber brick. Then you show the outcome could have been a lot differed as you reveal the other bag contains a REAL BRICK which drops to the floor with a devastating thud!
This routine has everything. Comedy, drama, audience involvement and suspense. The kit comes with everything you need to perform this hilarious and intriguing opening effect. Plus, the real brick provides a great transition and possible call back for another comedy bit you can follow up this routine with. You can also use the fake brick to randomly choose audience members for your next effect. This professionally crafted routine has it all!!

"I saw this and added it to my corporate shows immediately!" - Scott Wells "The Magic Word Podcast"

Comes with bricks, bags video instruction. You provide the phone and the showmanship!