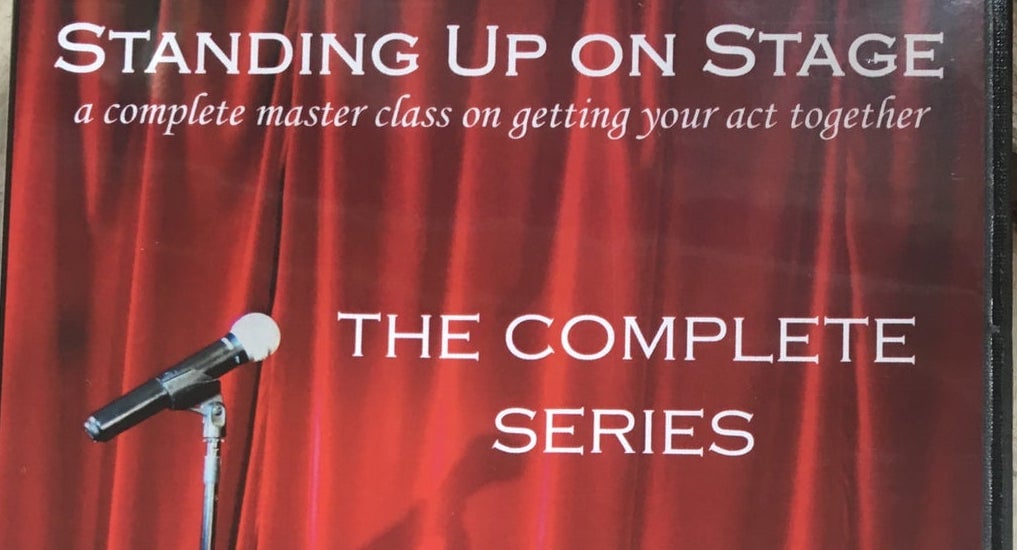 Standing Up On Stage Box Set

This is the complete 6 Volume boxed set of Scott's Standing Up On Stage Series. This is the most comprehensive volume on the performance of Stand Up Magic ever produced.

THESE SIX DVDS INCLUDE 24 STAND UP ROUTINES AND FULL PERFORMANCES! PLUS EACH DVD HAS PRACTICAL ADVICE ON EVERYTHING INVOLVED IN CREATING A MEMORABLE, EFFECTIVE AND HIGHLY ENTERTAINING MAGICAL EXPERIENCE FOR YOUR AUDIENCE.

Volume One - Opening Acts
In this first of five volumes Scott teaches you how to create an effective opener for your show. Revealed in this volume in the Directors Guide segment are tips on making an entrance and getting and keeping an audiences’ attention. During the Character Development chapter, Scott begins the process of helping you to hone in on your character using a “Style Star,” and why it is important to know who you are, and why the audience should care.
On this DVD there are four examples of opening tricks described and explained in full detail including:

HOW MANY TIMES?
Your watch vanishes and reappears and the finale leaves your audience filled with laughter.

CANDLE TO FLOWER
A candle changes to a flower under dubious circumstances and the audience loves you instantly.

BALLOON MORPH
A visual transformation of a cane to a balloon and back to a cane. This is a highly visual, gasp producing opening effect.

CARDSLINGER CONTEST
Scaling cards into the crowd has a new and exciting premise with a big payoff for one lucky audience member.

STANDING UP ON STAGE - DVD SERIES
a complete master class on getting your act together
Volume Two - Personality Pieces
In this second of five volumes Scott teaches you how craft a piece of magic that instantly identifies your character to an audience. We explore why your second effect should let the audience in on your personality to create and set the tone for the rest of your performance. In the Directors Guide section, Scott also discusses the importance of using simple lighting in many situations from a grand stage to a hotel ballroom, because if they can’t see you, they can’t enjoy you. This DVD contains the second of three “Style Star” sessions to help you lock in on your character and how this should inform everything from your trick selection to your publicity materials.
On this DVD there are four examples of personality tricks described and explained in full detail including:

NATURAL ENEMIES
A needle and a balloon collide in an explosion of personality and character.

A FAKIR MIRACLE
Scott’s personality driven performance of the Chop Cup and how you can apply its thinking to your performances. This features vintage clips of Scott at Caesars Palace in Las Vegas.

WATCH THIS ONE
Scott’s pet secret, originally the brainchild of Alain Nu, elevates the Invisible Deck to new heights of amazement and fun as an invisible watch appears on your wrist.

PIMP BILL REPEAT
A modern presentation of the Six Card Repeat with $100 bills and a whole lotta swag!

STANDING UP ON STAGE - DVD SERIES
a complete master class on getting your act together
Volume Three - Feature Acts
In this third of five volumes Scott teaches you how to analyze your effects to create a rich and well rounded show. Revealed in this volume on the Directors Guide section are tips on the effective use of audience participation and spectator management. In the Character Development portion, Scott wraps up the process of helping you to hone in on your character using the “Style Star.” He gives you examples of how to turn the star you create into an effective marketing strategy.
On this DVD there are four examples of opening tricks described and explained in full detail including:

MALINI EGG BAG
The most bullet proof trick in magic is tipped in full detail. It is comedy, audience participation and pure magic. This is the trick that you will want in your arsenal thats always ready to go and can be done anywhere under any conditions.

THE FLYING RING
Long pigeon-holed as a close up effect Scott teaches you how to take Ring Flight to the stage and how this thinking can help you frame other smaller effects you already perform.

KILLING IT
A terrific premise for the classic balloon murder plop that involves the whole audience creating sound effects for a murder mystery. Plus Scott’s premise of “killing an idea” has lots of comedy potential.

INDIAN MEMORY MAN
Published in For Bob Cassidy, this is Scott’s humorous twist on Bob’s Master Card Memory featuring tons of laughs and a devastating effect.

Volume Four - Skill and Danger
In this fourth of five volumes Scott teaches you how adding elements of both skill and danger can effectively enhance the mood, tone and pacing of your show. In the Directors Guide section, Scott discusses musicality and how to effectively use music in your show to enhance the audiences enjoyment. He also covers sound and playback systems as well as microphone technique. In the Character Development chapter he emphasizes the importance of sincerity, authenticity, vulnerability and emotional hooks and how to get these valuable feelings and emotions into your performances.
On this DVD there are four examples of opening tricks described and explained in full detail including:

MATCHES MELT
Terry Seabrooke’s Cigarette in Coat gets a clever and politically correct update for a modern audience suitable for adult or family shows.

NEEDLE THROUGH ARM
Explaining how magicians create realistic illusions, Scott shares his easy and diabolical way to pull this unsettling act of danger off right in front of the spectators nose.

Volume Five - The Ovation
In this fifth of five volumes Scott teaches you about the “Rule of Three” and how to create an effective closing effect for your show. Revealed in the Directors Guide on this volume are tips and tricks on getting standing ovations, using callbacks, running gags and effectively planning your entire show program. In the Character Building section Scott reveals how scripting inspires confidence, consistency and star quality. Also covered in this section are crafting your image and consistency on social media and making them want to hire YOU!
On this DVD there are four examples of opening tricks described and explained in full detail including:

HUMAN SEWING MACHINE
A streamlined and inexpensive version of Scott & Puck’s The Needles strong enough to be used as a closer or anywhere in your show.

TOXIC ACAAN SQUARED
The Magic Square gets a reboot by infusing the classic ACANN plot TOXIC FORCE and a kicker ending that makes the audience jump to their feet.

STARS
A warm and enchanting closing effect combining Dan Harlan’s Starcle and the classic snowstorm, creating an ultraviolet and unforgettable audience experience. Scott closes with this one a lot because of its strong audience appeal.

HYDRO-TASTIC GLASS
A thoughtful version of the Hydrostatic glass you can make for pennies, combined with a wonderful premise based on the philosophy of Bruce Lee.

DIRECTORS GUIDE
Scott opens with a discussion on finding a mentor and how it can be instrumental in your development as a performer. He gives you the secret formula for developing your stage presence. To wrap it all up, Scott discusses encores and “in one” pieces and why you should collect them
THE TRICKS

SERPENT SILK A silk handkerchief magically unties itself repeadedly while you playfully explain to the audience how magic works. This is a trick that has its roots in the past and is seldom seen today, giving you a uniquely stunning visual to add to your show.

KARATE CARD IN MOUTH
A new, hilarious take on the Card in Mouth! Scott tips his own super fast, secret card fold. This fold can be used both on stage and close up.

AMERICAN STICKS
A gut busting comedy routine full of magical moments that you can perform with any set of Chinese Sticks. Plus Scott explains the underground Charlie Miller Move which really enhances the mystery!

SPEED LINK
Scott takes the Himber Ring to the next level. It’s a pristine version of the Himber Ring with no fumbling and great audience interaction. Perform this with any standard Himber gimmick. Scott also details the extremely visual Al Koran unlink!

Business cards - headshots - posters - websites - promo videos - social media.
Scott discusses how he uses all of these things effectively in his own business. He shares all of his tips, tricks and training about how to structure your promotional materials in a way that makes connections and books the gigs!

PEOPLE ARE RAVING ABOUT THESE DVD AND I COULDN'T BE HAPPIER!

"THESE NEED TO BE IN EVERYONES LIBRARY RIGHT NEXT TO FITZKEE AND TARBELL!"

"DO YOURSELF A FAVOR AND GET THESE...THEY ARE LIKE MAXIMUM ENTERTAINMENT ON STEROIDS."

"I WISH I HAD THESE WHEN I WAS STARTING TO PUT TOGETHER MY SHOW...EVEN THOUGH I HAVE BEEN DOING THIS FOR 30 YEARS I LEARNED THINGS ON THESE DVDS I NEVER EVEN CONSIDERED.'

'SCOTT ALEXANDER YOU HAVE A WAY OF TEACHING MAGIC THAT IS EASYGOING AND EASY TO UNDERSTAND. THESE DVDS ROCK."

'I IMMEDIAETLY INCORPORATED THREE IDEAS FROM THE FIRST DVD INTO MY SHOW AND THEY MADE A HUGE DIFFERENCE. I CAN'T WAIT TO GET THE REST OF THESE. WELL DONE."