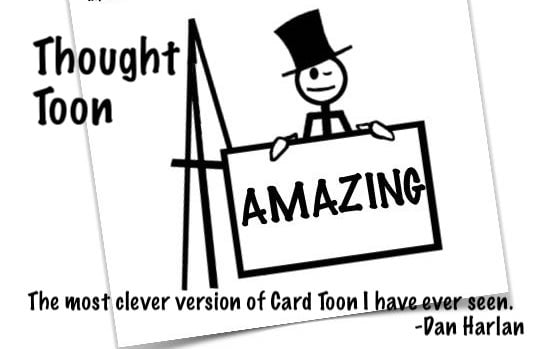 Any word picture or thought can be drawn and revealed by this clever little guy. This is exactly like Dan Harlan's brilliant Card Toon but you can have Mr. Stickman reveal anything you want. Two options for the discerning performer as we offer them in either a Bicycle Maiden Back Red Deck of cards or note pad style.

Imagine asking a friend to name someone close to them. You offer to draw a picture of the friend. When you show it to them it is a stick figure. Then you grab the flip book or deck of cards you handed them before you began and flip through it.

Mr. Stickman takes off his hat and reaches in and pulls out a magic wand. But wait it is not a wand, it is a pencil. He then tosses his hat into the air and walks to the easel. He begins to write, taking a moment to peek out from behind the easel to wink at your spectator. As he picks up the finished drawing he stumbles as his hat falls back to his head. He turns the drawing around and much to their amazement the little guy reveals the name of their friend they were thinking of....or ANYTHING YOU DESIRE.

This is limited only by your imagination. You will receive the necessary props and refills for 54 performances. Refill kits are only $20 per 54 shows. The great thing is that you can give away the final drawing as a souvenir for the spectator to take home to remember just how you blew their mind.

The training movie shows many ways to get and deliver the information. Including many real time solutions that involve no pre-show.

This is a perfect follow up effect to Card Toon if it is already in your set.