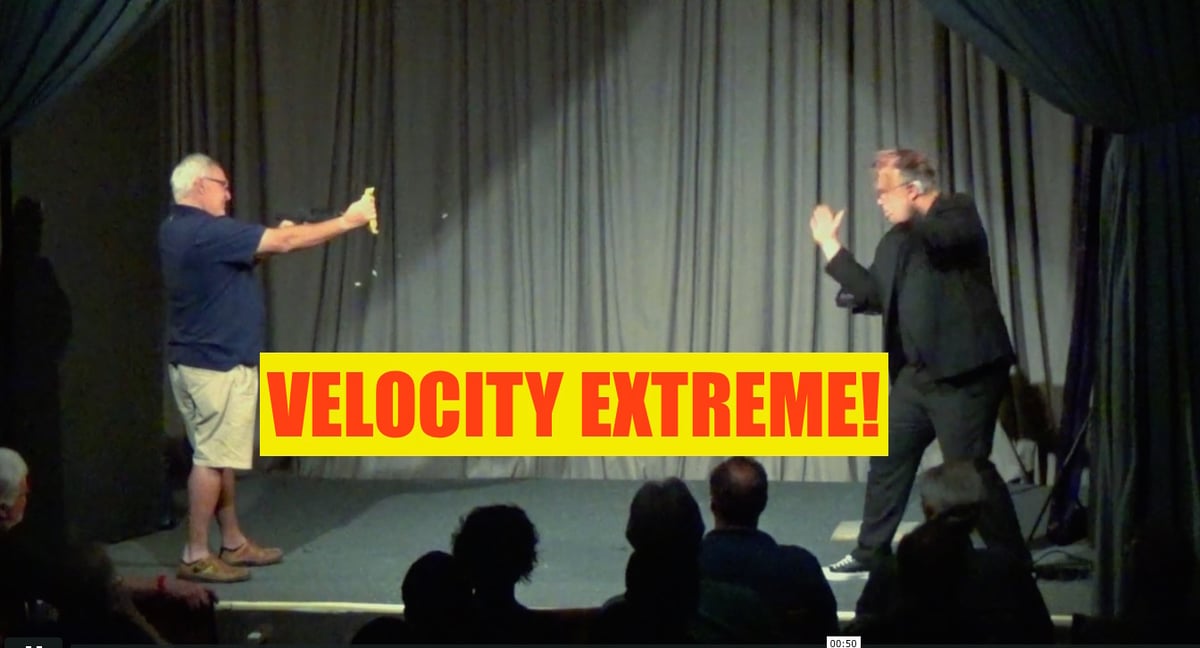 Velocity 3.0 is the most recent incarnation of his wildly successful Bullet Catch using a paintball gun. The gun we supply is extremely threatening. Bob Kohler Magic has modified the gun in an extremely clever way so that the gun does most of the work for you! Velocity is a truly impossible mystery.

Velocity Extreme
Velocity is the brainchild of Scott Alexander. It's his adaptation of the classic "Signed Bullet Catch". Scott has been performing various versions of his routine since 1989. Over the years, Velocity has gone through many incarnations and upgrades. Velocity Extreme is the greatest version since Scott created the routine! The reality is Velocity Extreme is not an upgrade, it's essentially an all new product. Read on to find out how.

The New “Extreme” Gun Technical Details
Past incarnations of Velocity have used paintball markers that did not look like a gun. They were introduced to the audience as a paintball marker. That has all changed. Velocity Extreme is actually is a paintball marker but it looks more like a real gun. It's modeled after a 9mm pistol. It looks much more dangerous than any of our previous versions.

The new "Extreme" version is by far the best version of Velocity since it's inception.

• The signed paintball is loaded by the spectator into a clip exactly like a 9mm.

• A significant percentage of the gun is made of metal, it will last for decades.

• The gun is under complete control of the spectator creating "test conditions."

• Our new handling is incredible & deceptive from start to finish.

• Velocity is now easier to do than ever!

The Steal & Load
We have spent the last year developing the new Extreme version with not only a new gun but also a new steal of the signed paintball and a new method to load the signed ball into your mouth.

The Steal
Our new handling has been simplified by letting the spectator take complete control of the gun after they sign the paintball. They hold onto the gun and clip while they load the signed ball into the clip and insert the clip into the gun. Anyone who has handled a pistol knows that the "bullet" in our case a paintball stays in the clip until the gun is cocked. Velocity Extreme has been gaffed to deliver the signed paintball to you in an instant. It's as fast and deadly as a rattlesnake bite!

The Load
Since it's creation all of our versions of Velocity have relied on loading the signed ball into your mouth using a technique that required a large motion and a fair amount of acting.

Velocity Extreme has a NEW method that Scott has created that let's you openly load the ball into your mouth in a slow, fair way with no suspicion at all. This extremely clever load is a major upgrade to Velocity.

When you combine the new Steal with the new Load and the new Extreme gun this version of Velocity is completely new!

New Handling…New Jokes
Velocity Extreme creates danger, suspense and big laughs. First we build up the danger and suspense that the gun is real, it really fires the ammo and now with Velocity Extreme the new routine really sells the reality of DANGER. This is magnified by the fact the spectator handles the gun throughout the loading process!

The audience is totally convinced by our new routine that if something goes terribly wrong, the performer will suffer the consequences and be injured. Nothing could be further from the truth, Velocity Extreme is totally safe but the audience will be on the edge of their seats!

The routine however even with the danger and suspense is really funny. New, well placed jokes provide just the right amount of entertainment to keep the audience balanced between suspense and belly laughs.

Incredibly Easy To Do
It really doesn't get any easier than this. Velocity Extreme provides the performer with the best equipment that does the work for you. Velocity Extreme is mechanically superior to all previous versions of Velocity! The spectator unknowingly delivers the signed paintball to you without any suspicion…period.

Once you master the simple handling you can concentrate on your performance. Forget about technique, the gun mechanically does the steal. The load is effortless.

For protection of your investment the video is embedded with each owner's identity.

After purchase you will received an email from Bob Kohler Productions with the link to your video download.

Availability & The Backorder Process
If you would like to check on availability before purchase please write to: bobkohlermagic1@gmail.com.

We will respond ASAP but please be advised that sales on the internet are instantaneous. It is possible we will advise you Velocity Extreme are in stock but in fact our stock is sold out before your purchase. We are not responsible for any backorder situation.

After purchase you will received an email from Bob Kohler Productions with the link to your video download.
Television Rights Reserved Contact Bob Kohler Magic For Details And Pricing